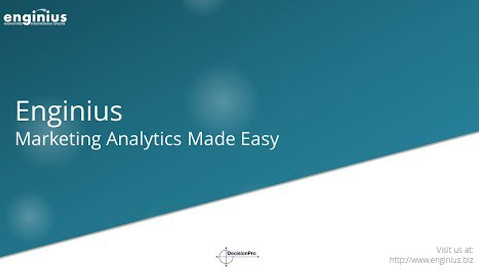 Get answers for the most frequently asked questions about the Enginius Bass forecasting module. For a quick overview, we suggest you check the introductory video first.

Bass forecasting in a nutshell

The Bass diffusion model is used to forecast the sales of a new product or service that has no close competitors.

The model helps to predict: (a) the number of customers in the target segment that will eventually adopt the new product or service, and (b) when they will adopt it.

To download the Enginius tutorial in pdf format: (1) Follow the link below. It will open an example data set, then (2) Click on the link in the upper-left corner of the screen.

How to select an analog product/technology?

In most applications of the Bass model, the selection of analog products will be the critical decision in the successful implementation of the model.

Here is a list of criteria developed in the seminal work of Rogers (1962) that is useful to keep in mind:
(1) ease with which the customer can try the product/technology before purchase,
(2) relative advantage of the product over existing alternatives,
(3) compatibility of technology with existing practices,
(4) Ease of use of the technology, and
(5) Observability of the “benefits in use” of the technology.

Should I use the basic Bass model or the advanced Bass model?

Generally, it is best to start with the simple Bass model, because it often provides forecasting performance comparable to that of the advanced Bass model, especially if the proposed marketing plan for the new technology is already well defined.

If you wish to explore how the forecasts would change with changes in marketing plans for the technology, it would be helpful to explore those scenarios using the advanced Bass model.

What is a good way to specify the eventual market potential?

The simplest (and our recommended approach) would be to specify eventual market potential on a scale of 0% to 100%, where 100 represents the size of the target population.

In this specification, the market potential at the introduction of the new technology could be low, but it could grow over time to reach a larger percentage of the target population.

Using this approach, the user would still have to translate model forecasts, which are reported as the percentage penetration of the new product/technology at any time t, into the corresponding absolute number of units sold based on the actual size of the market at that time.

Within Enginius, it is also feasible to specify the market potential based on the actual size of the target population, and also to allow for that size to grow over time.

How many scenarios would be ideal to select?

You can also consider specific scenarios, such as “customers will quickly try the product through free trial offer” or “the installed base will switch slowly to the new technology.”

What if I get very different forecasts from different analogs?

The range of forecasts could reflect the uncertainties surrounding the diffusion of the new product or technology.

Once the user is satisfied that the analogs are all appropriate, then the forecasts reflect the intrinsic uncertainties about the future. In that case, it would be best for the user to explore various strategies to prepare for the very different futures that might evolve.

Such strategies include hedging, contingency planning, “bet-the-farm,” as well as “core strategies” to implement today regardless of which forecast turns out to be true in the future.